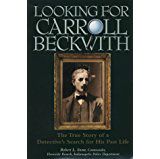 Looking for Carroll Beckwith: The True Story of a Detective's Search for His Past Life

FROM THE BACK COVER:  What do a nineteenth-century painter and a twentieth-century police commander have in common?  Perhaps their very souls.

Captain Robert L. Snow, commander of the homicide branch at the Indianapolis Police Department, is about to embark on a startling journey--one that will take him far away from the orderly and controlled life he has known.  Captain Snow is about to go back in time and meet who he was in a previous lfie.

In Looking for Carroll Beckwith, Robert Snow tells the true story of his search for his past, hints of which he discovers while under hypnosis.  Haunted by the images he recounted, Snow sets out to prove them wrong, using the rational, just-the- facts techniques of a veteran police investigator.  Instead, in an enthralling and surprising journey, he proves not only to himself, but also to the entire world, the amazing truth:  that most every recollection he had while hypnotized actually happened--nearly 100 years earlier!

Review of Looking for Carroll Beckwith